Each expert instructor is trained individually by Nofar to master her methodology. All our instructors have knowledge of anatomy and physiology, and can help to modify exercises for pre and post-natal adjustments, injuries, or other limitations. Each instructor aims to make sure every class is inspiring, stimulating, and fun while being effective at giving you the shape and performance you want. Our goal is to give every client the personal attention needed to help you achieve your goals. Each instructor will encourage and challenge you to push yourself while remaining loving and supportive. We treat everyone just as we wish to be treated by providing excellent customer service in a welcoming, friendly, and professional environment.

Sign up for email updates and offers from Nofar Method 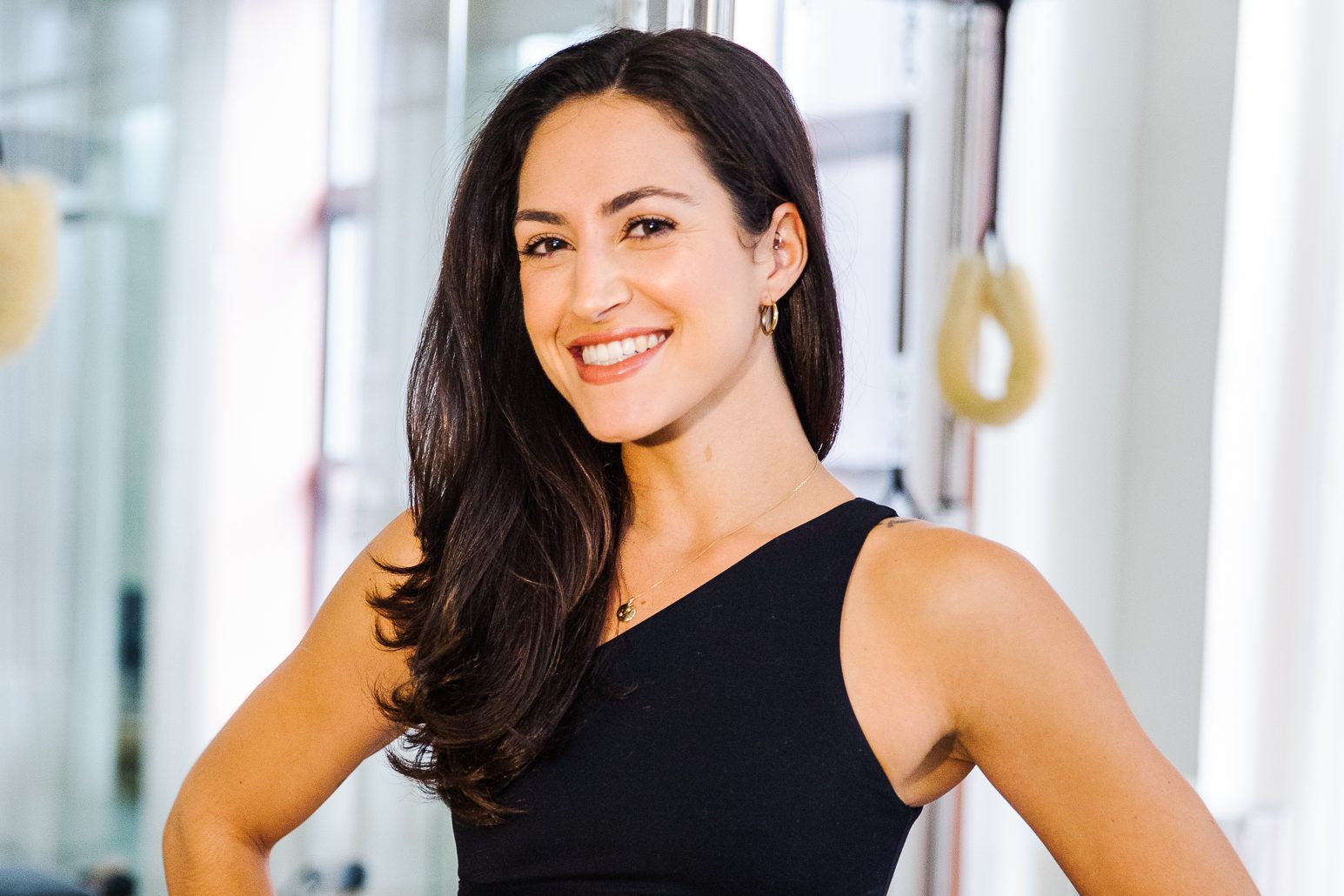 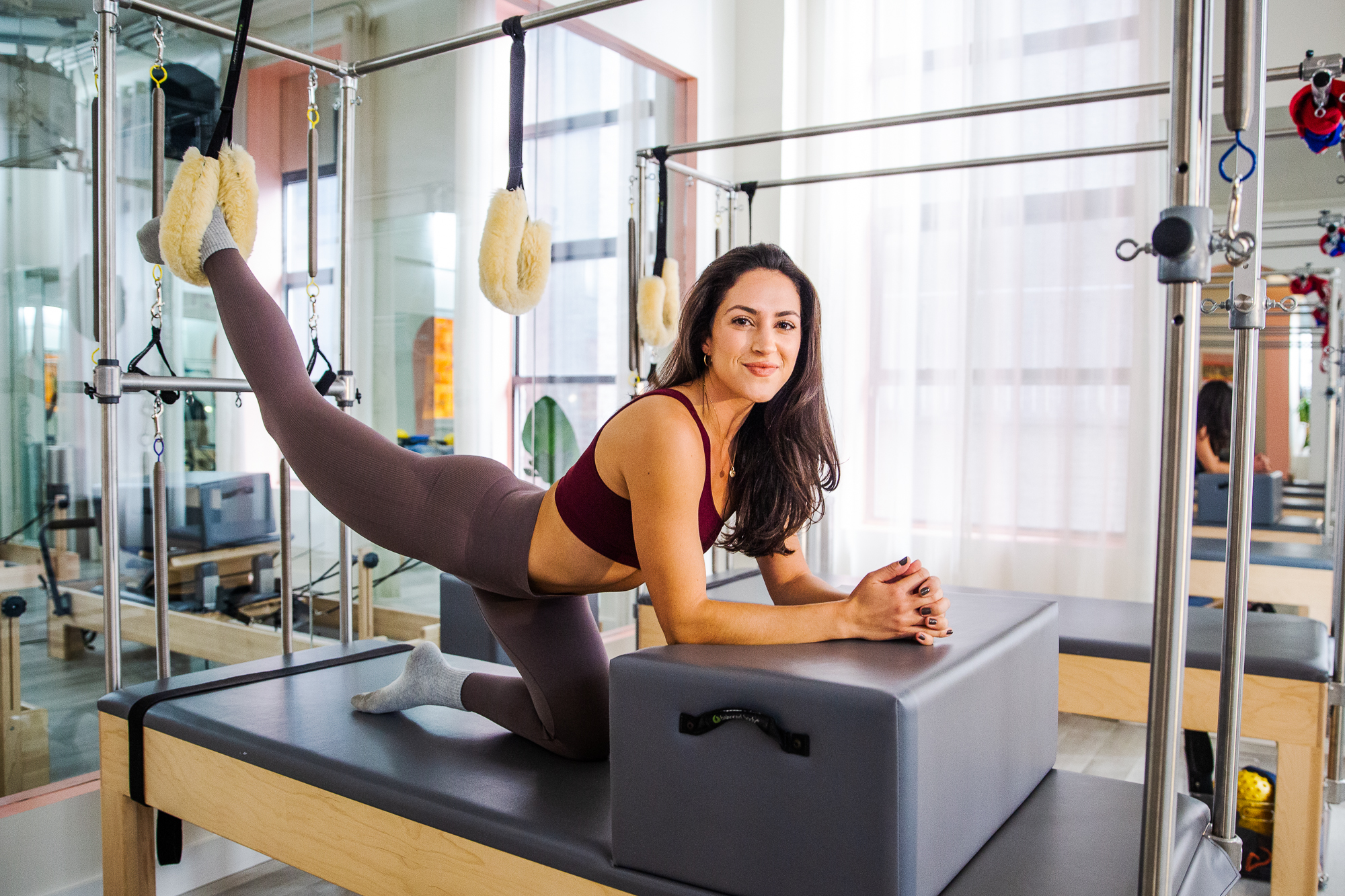 Stephanie is an enthusiastic and motivating instructor who spent the majority of her early life being active in soccer and track, which ultimately took a toll on her hips and joints.  Due to the daily stressors of working in a fast-paced career in the music industry, she pivoted her training to focus on new methods that would lengthen and strengthen those overworked muscles. Since discovering Nofar Method, she instantly felt connected to the unique and custom moves, giving her confidence in her own body and feeling as strong as ever. By tapping into her strong intuition, she is great at gauging when clients are simply not feeling the movement where they should be, due to improper structure and poor alignment. Through hands-on adjustments and constant awareness, she makes sure clients leave feeling like they learned how to flow through moves the right way.
Instagram Envelope Linkedin-in Twitter 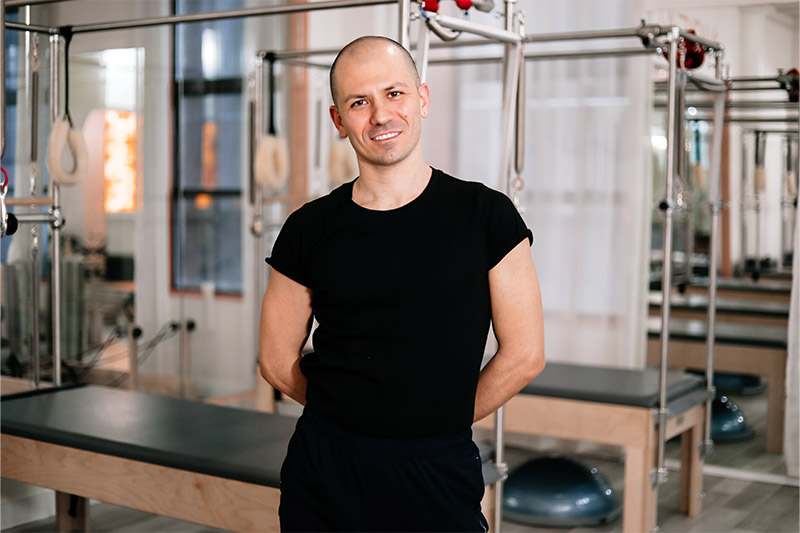 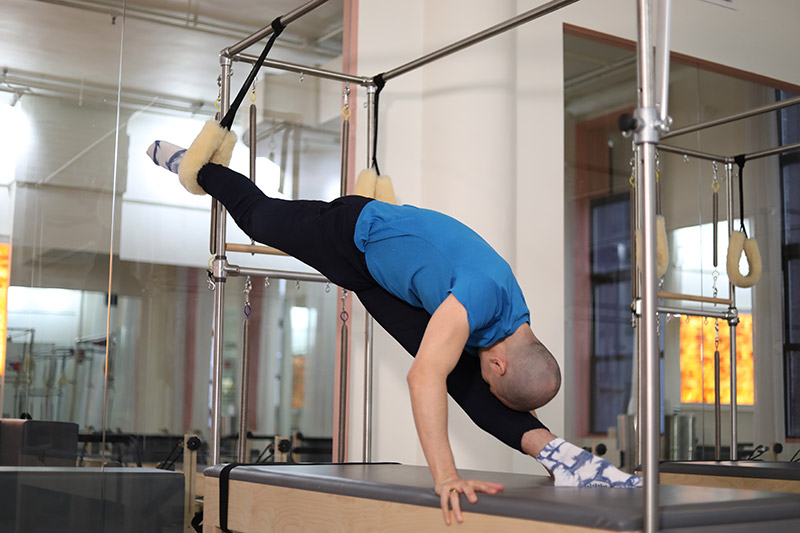 Antonio is a guest Judge for Dancing With The Stars Italy. He has danced for all the major dance companies and directs festivals in New York City and Europe. He met Nofar at the former Sal Anthony’s Movement Salon where they worked together. He has been teaching Pilates for 15 years. In his private classes he loves to help people understand their alignment and get stronger! He specializes in helping people with scoliosis, lower back, and shoulder pain. Antonio has extensive experience working with all ages. “During the pandemic I injured my knee and overworked my body teaching dance online but thanks to Nofar Method I’m re-organizing my body! My classes are incredibly challenging but still focus on your form! Come take my class and make sure you drink a coffee! I’m still a director and I need your attention!”
Instagram Envelope Linkedin-in Twitter 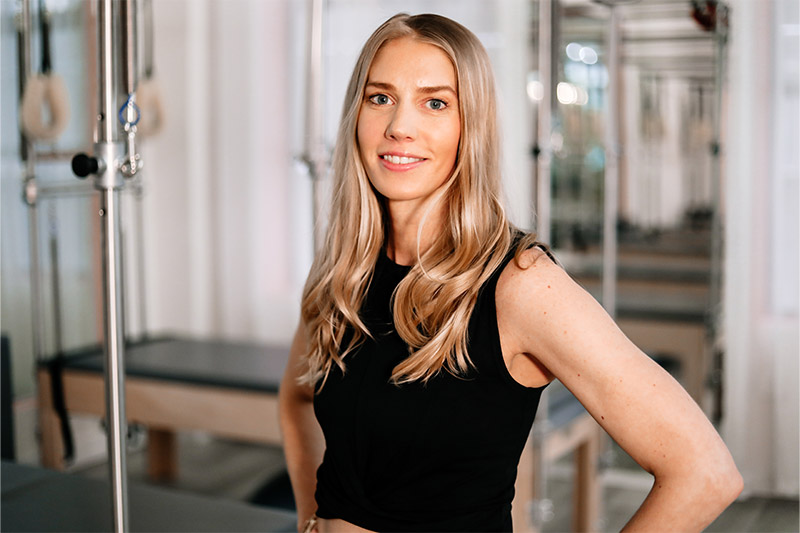 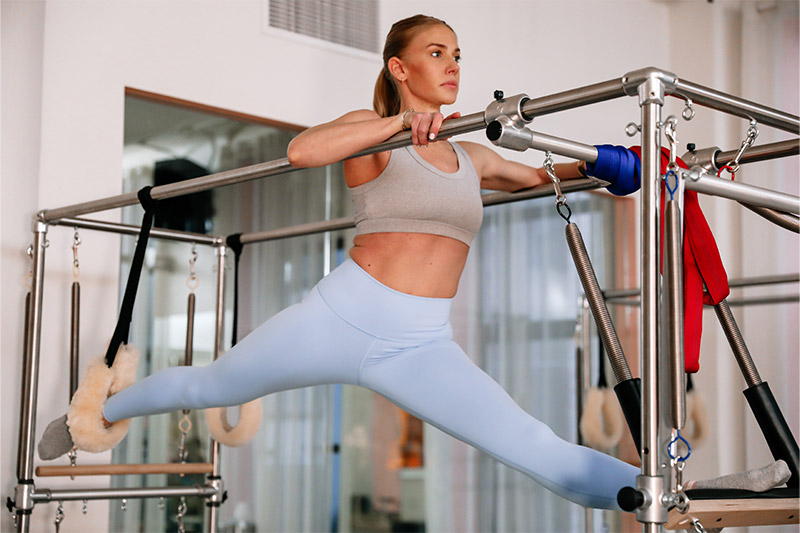 Kara began her Pilates Journey at the youthful age of 10 while training as a competitive figure skater. She became a Pilates devotee as the practice increased her strength and flexibility with unmatched effectiveness. She was drawn to Nofar Method’s dynamic full-body workout that emphasizes athletic and innovative movements for amazing results. Kara loves to start her day by giving her clients’ a morning burn session before heading to her 9-5 job in corporate retail.
Instagram Envelope Linkedin-in Twitter 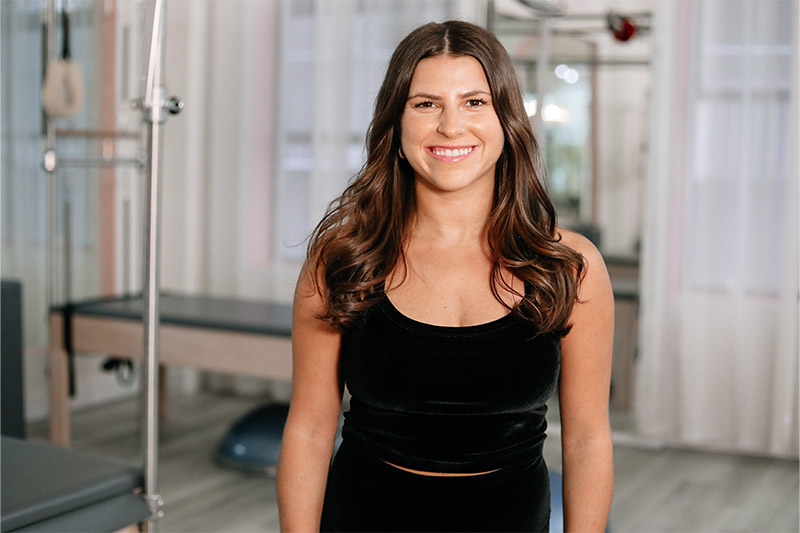 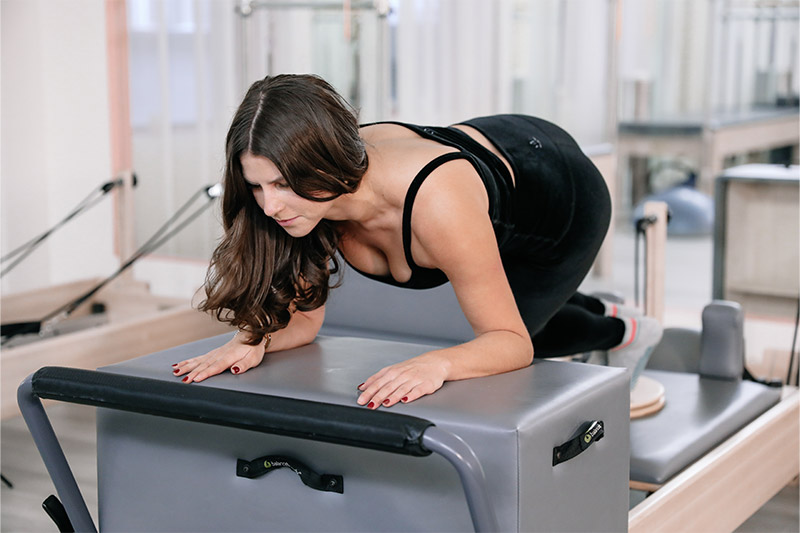 Brooke grew up playing high-intensity sports, which led to her constantly taking high-intensity workout classes resulting in constant back pain. Eventually, Brooke fell in love with Pilates. With Pilates she found that the slow movements did not cause her back pain and toned her body in a more efficient way. After trying nearly every studio in NYC, Brooke found Nofar Method and was hooked. During the day, Brooke is a social worker. She loves coming straight to the studio for a full-body workout. She enjoys giving her clients a challenging and effective workout that targets abs, arms, and glutes.
Instagram Envelope Linkedin-in Twitter 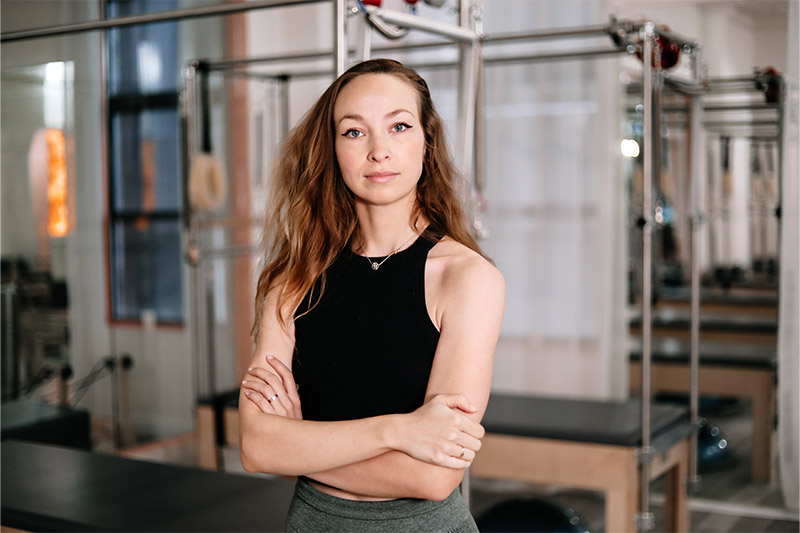 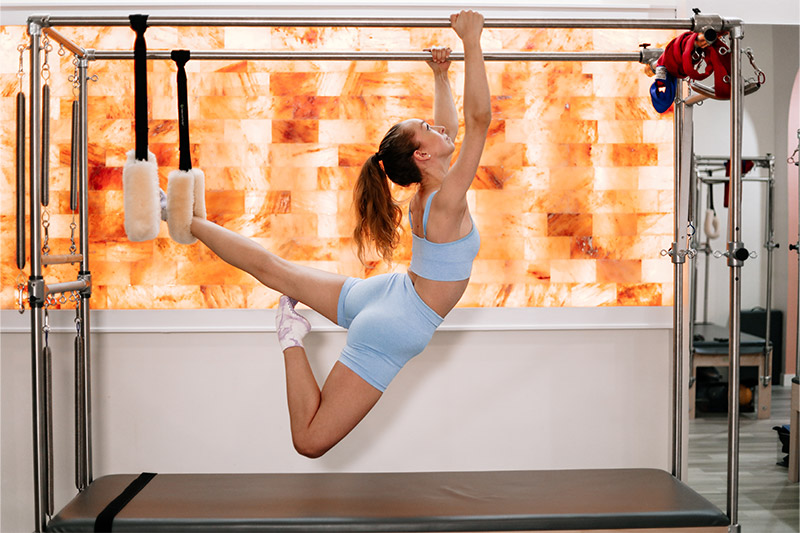 Kine is a Norwegian ballet dancer and teacher and  has toured with dance companies around the world. From her dance background, she believes any workout and movement should focus on quality, not quantity. This is why she has always loved Pilates. Since Nofar Method emphasizes doing exercises correctly with the right guidance, a Nofar Method workout will give you more full-body strength faster than hours spent in a gym. After years of building body awareness, attention to details and anatomy, Kine hopes to share her knowledge to give each person the best possible experience – a challenging class in a therapeutic and fun environment.
Instagram Envelope Linkedin-in Twitter 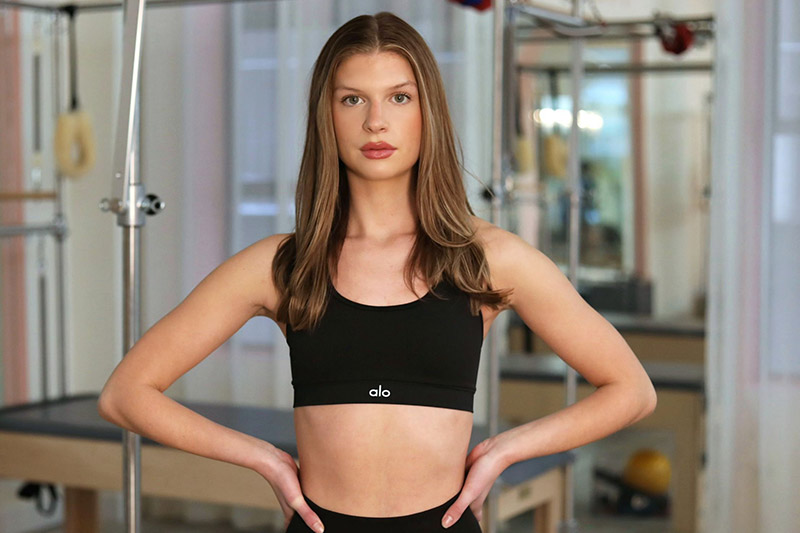 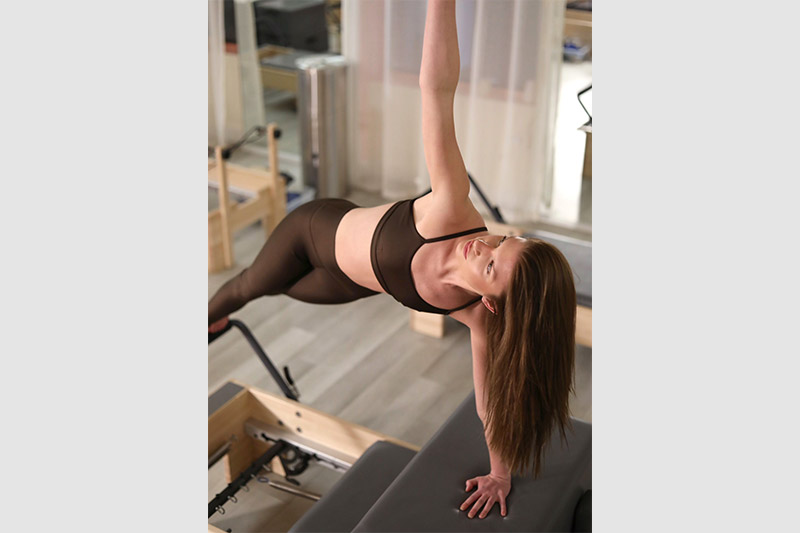 Astrid trained as a ballerina for 13 years and during this time she was introduced to Pilates. She found many similarities between ballet and Pilates, both focusing on alignment, length, and thoughtful movements. Studying Pilates has changed the way she views exercise and connecting with her own body. As a teacher, she strives to not only assist clients to further their physical strength but to also gain mental strength and confidence in their body’s abilities.
Instagram Envelope Linkedin-in Twitter 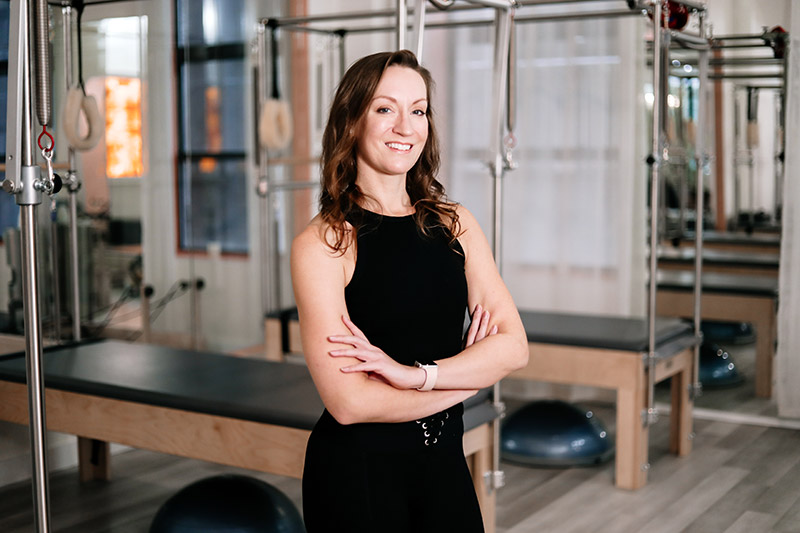 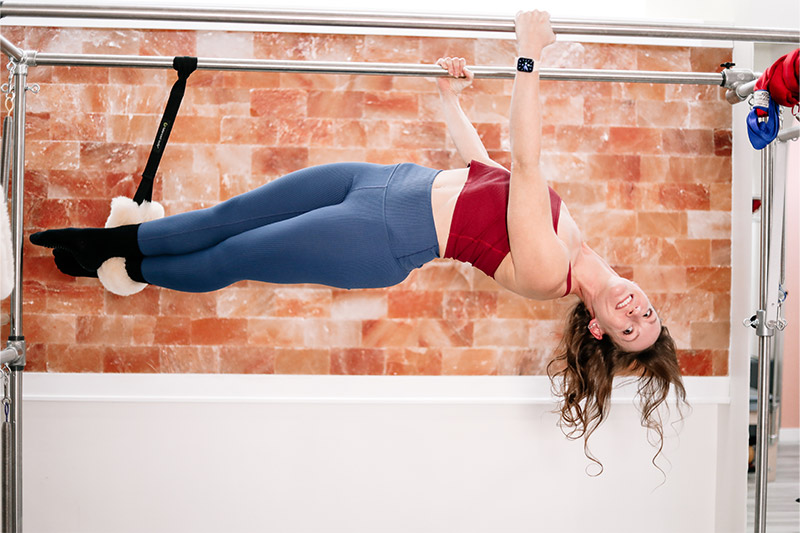 Andrea is a professional dancer who loves to stay active. She first got into Pilates to rehabilitate an injury; and once she saw the difference it made in her body and performance she was hooked. She has been teaching Pilates since 2011, and loves seeing clients gain strength, stability, and confidence in their movement. Andrea believes that we are all stronger than we give ourselves credit for, and she works with her clients to reach their goals in a supportive and non-judgmental manner. Andrea loves the intensity of the Nofar Method. You can expect a full body workout in her class with a strong focus on abdominal work.
Instagram Envelope Linkedin-in Twitter 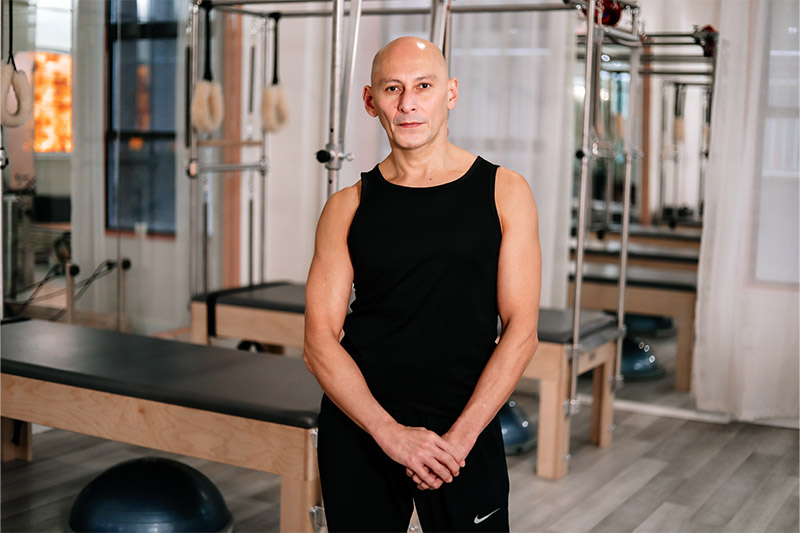 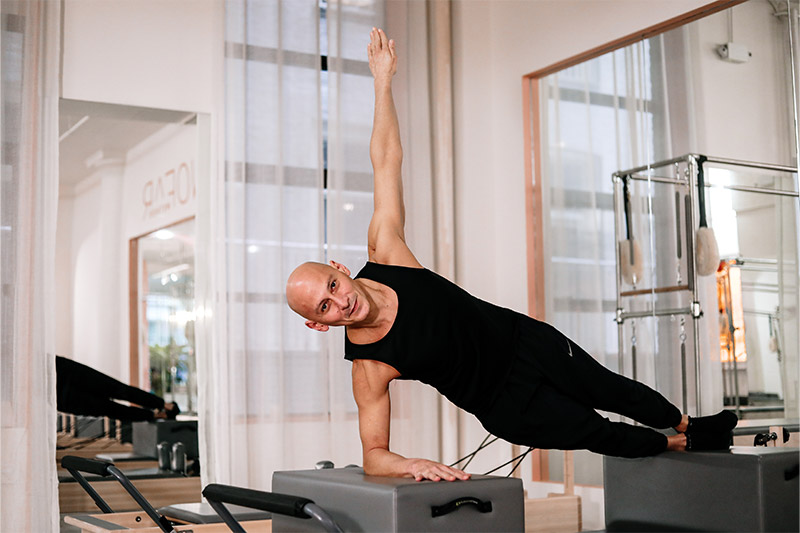 Javier Dzul is a professional dancer and acrobat. He uses his knowledge of dance and circus arts to transform the bodies and abilities of his clients to levels they never thought they could reach by increasing their strength and flexibility. Javier loves using the Pilates machines to combine contortion, aerial movement, flexibility and acrobatics. He enjoys the creativity and athletic approach of the Nofar Method classes where he can uses his 30 years of experience to help clients reach their highest potential. His classes incorporate strength & condition exercises on the reformer and challenge the body in multiple planes of motion and flexibility on the Cadillac.
Instagram Envelope Linkedin-in Twitter 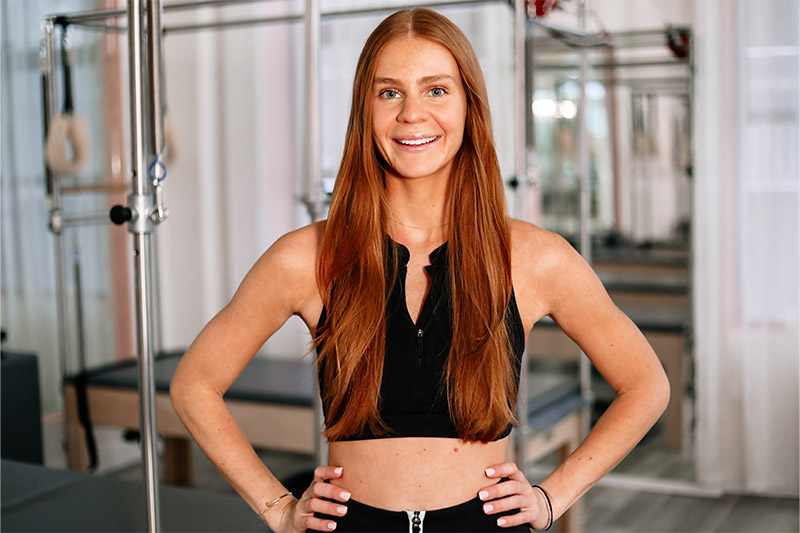 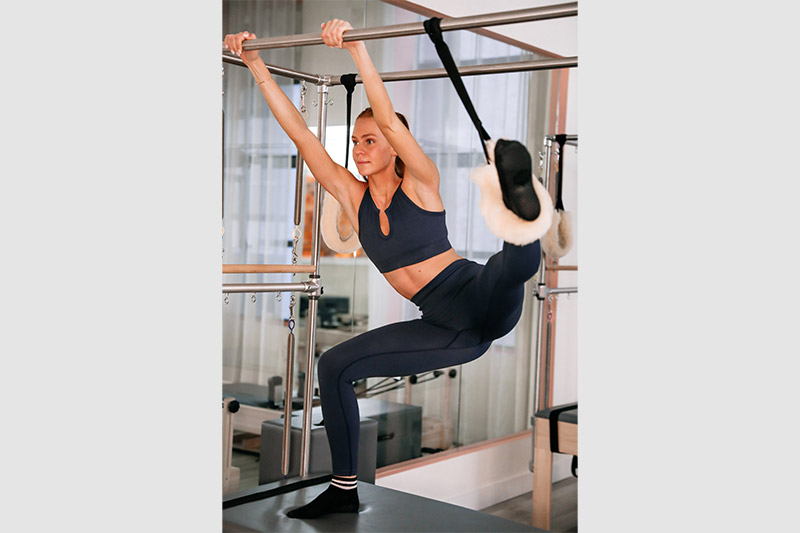 Maddie grew up playing lacrosse and field hockey and always craving a good sweat. After dealing with knee injuries and looking for something more low impact while still providing a great sweat and results, she discovered Pilates and Nofar Method in 2018. She loves starting and ending her days at the office with a full body, toning Pilates workout that focuses on every body part, her favorite being obliques and glutes on the Cadillac. Maddie specializes in modifying exercises to help heal injuries and strengthen the body. She wants every client to leave her class feeling a sense of accomplishment and excited to return the next day.
Instagram Envelope Linkedin-in Twitter 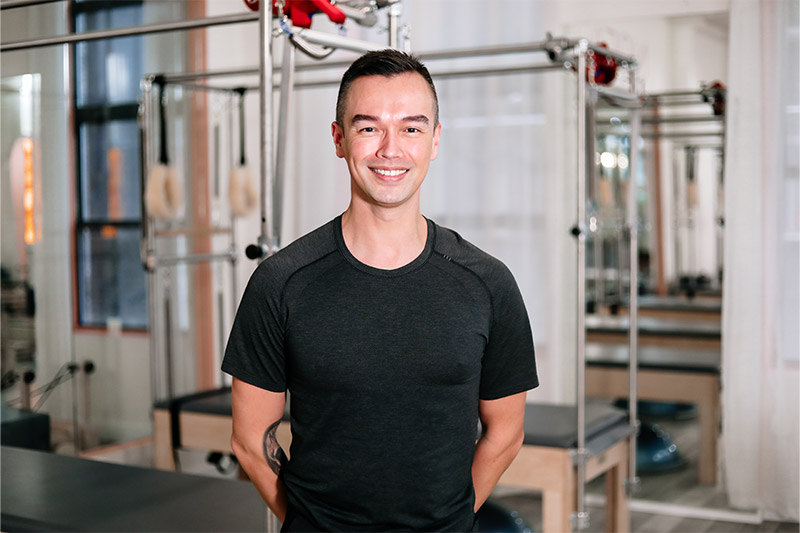 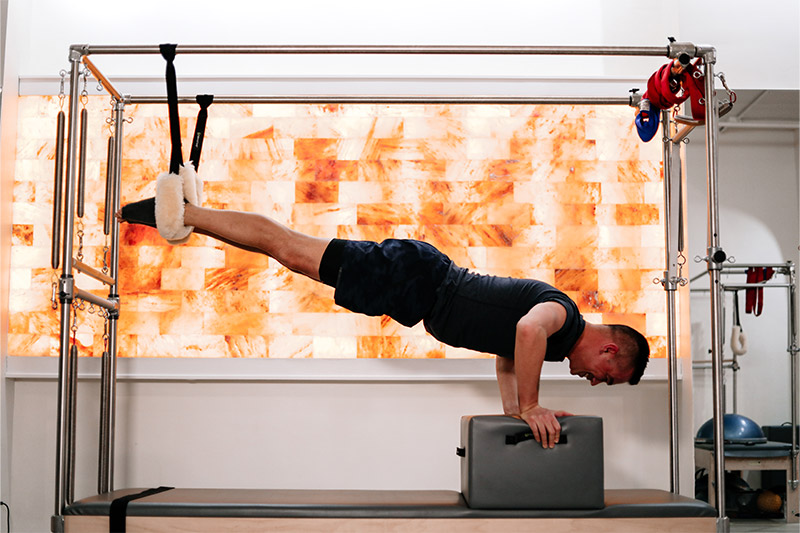 Chris took his first Pilates class in 2014 and has been hooked ever since. He studied under Nofar for five years before feeling worthy of sharing all that he has gained from Nofar’s teachings. His background in hospitality and dance means his classes are warm and friendly, but also challenge students to push themselves to become the best they can possibly be. Chris loves to focus on the core, and the Reformer is his favorite go-to equipment to get a killer core burn!
Instagram Envelope Linkedin-in Twitter 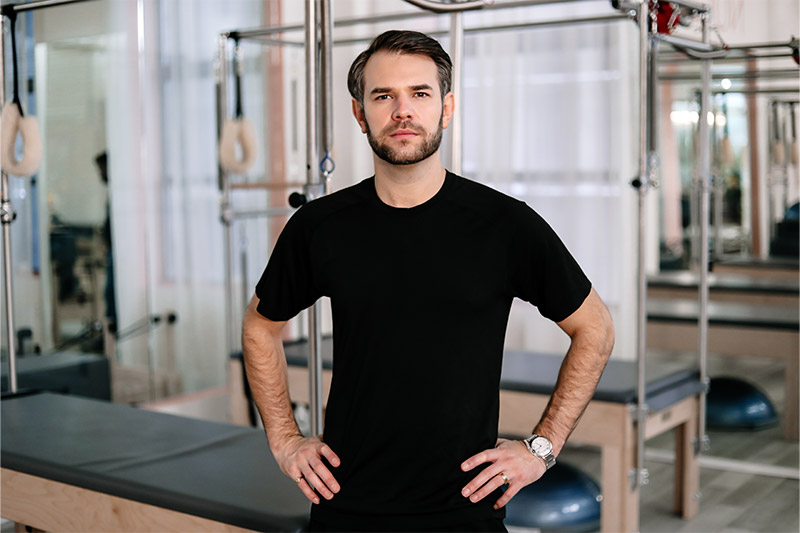 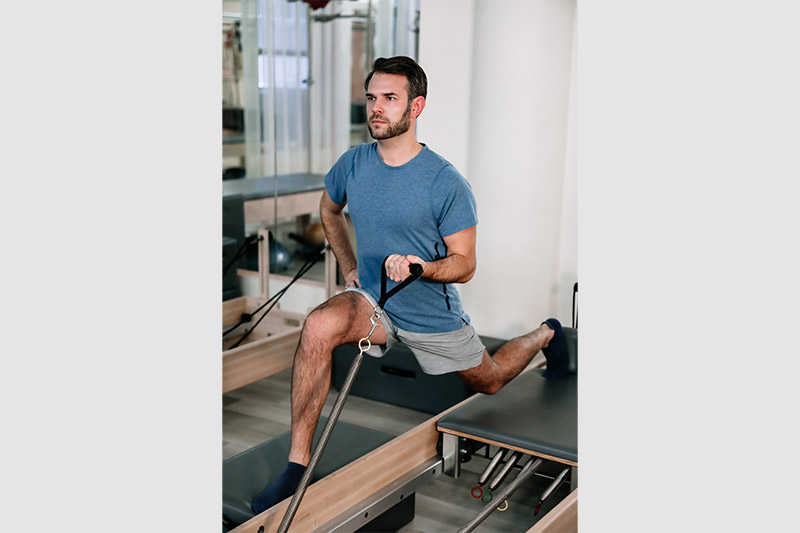 Finance by day, Pilates by night! Ryan has always had a passion for fitness and has tried most, if not all, of New York’s specialty gyms and workouts, but nothing ever really stuck. Then his husband introduced him to Nofar Method which, according to Ryan, “transforms your body into a piece of art”. His classes are full-body workouts, but he likes to focus on arms and core the most. “Gotta kill that core!” is a motto he lives by.
Instagram Envelope Linkedin-in Twitter 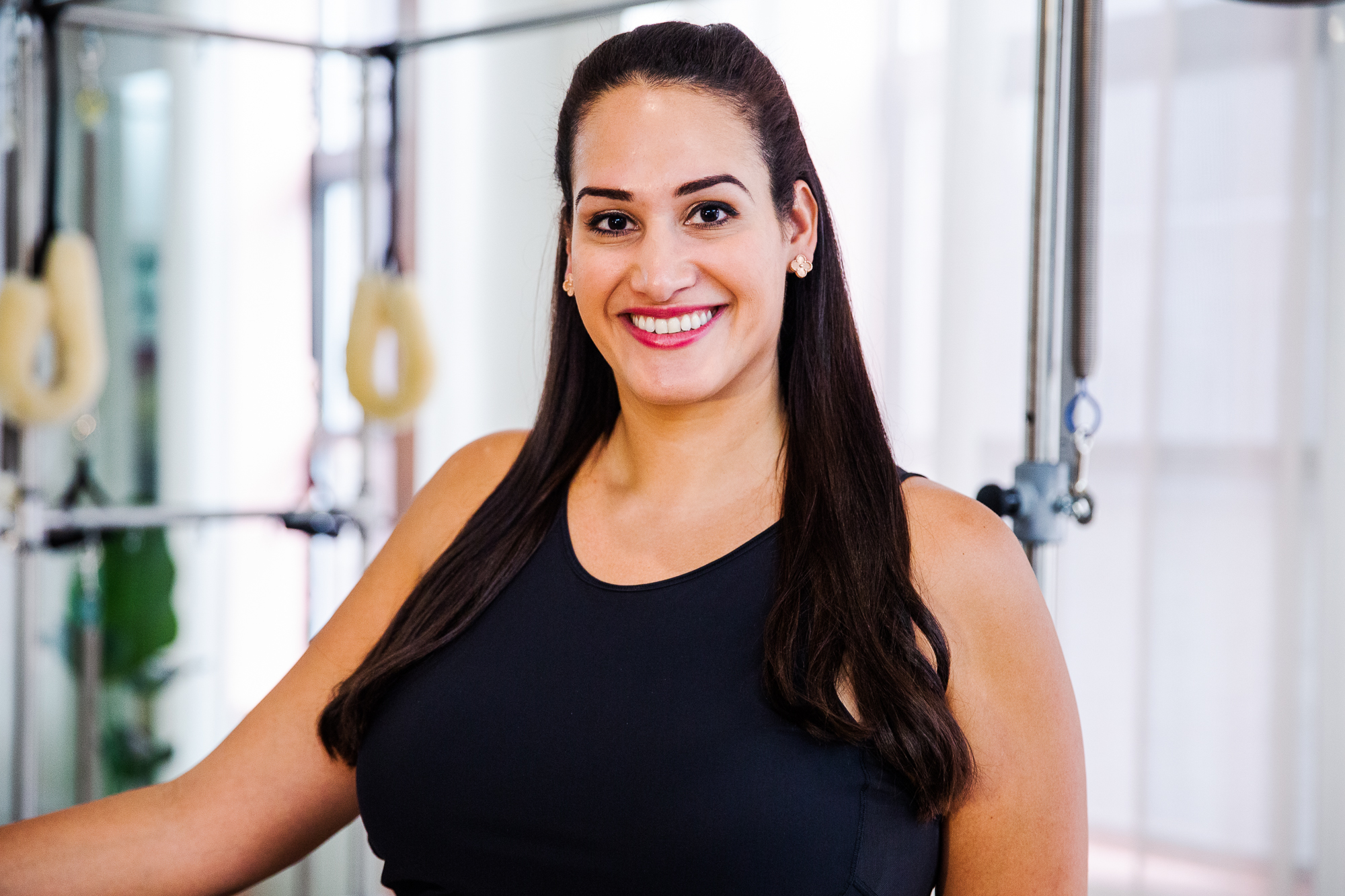 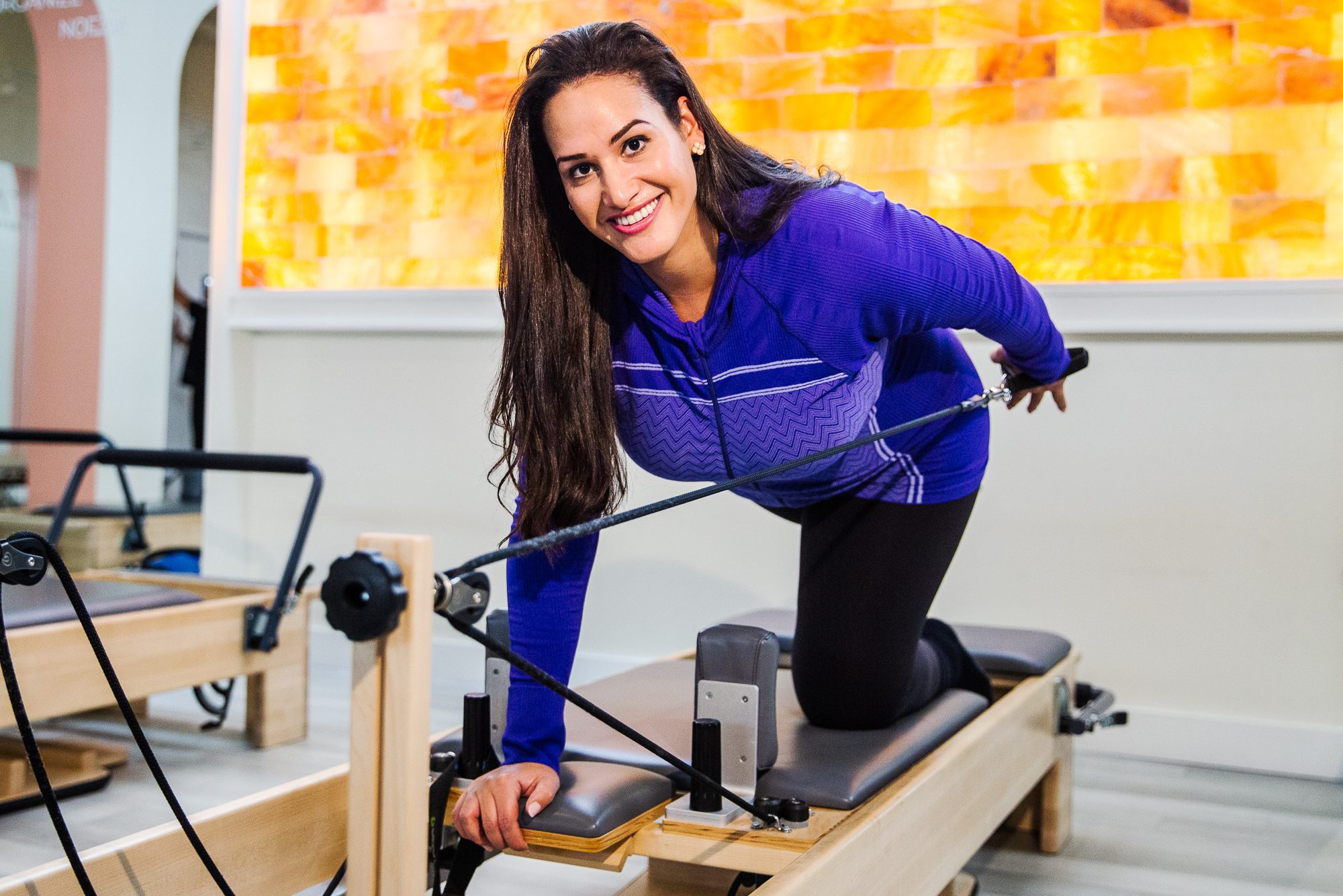 Nofar is from Petah Tikva, Israel. She began competitive swimming and water polo at age seven. Because Nofar was on the National Israeli Water Polo team, she was chosen as a fitness instructor for the Israeli army, which allowed her to compete internationally while still serving in the army. She received her Pilates certification in 2005 from the Wingate Institute, the Olympic training facility in Israel. After her service, Nofar moved to New York City as a student athlete, playing water polo for a NCAA Division 1 college league. Nofar taught Pilates at Sal Anthony’s Movement Salon for ten years before opening her own studio.

Nofar’s athletic background hugely influences the ethos of Nofar Method, compelling her to competitively drive beyond what she and her clients think they can achieve. Nofar pursued pre-med and psychology during both her bachelor and masters education. Her greatest take away from her studies is that everyone looks for connection. Humans want to feel seen, acknowledged, and held accountable. Human understanding and understanding of the human body are equally important for Nofar. Additionally, her service in the Israeli army shapes the discipline she brings to her classes, while a background in water polo gives her the competitive drive to make each and every one of her students go beyond what they thought they could do.

Nofar turned to Pilates as a way to accommodate past injuries while still showing results. Nofar strives to be fearless in everything she does and brings that feeling to her clients as they see their bodies change through the workouts. Nofar is a big fan of a full body workout in every class, so that every part of your body will look organized.